The importance of Entrainment in Drum Circles

Entrainment is important to drum facilitators in order for them to use foundation rhythms to allow a drum circle to find its “center” in which the drummers have synchronized to the natural evolving rhythms of a particular drum session. In this respect most facilitators are looking to bring that process forward so they can step out of way and let the drum circle “self-facilitate” its own natural evolving rhythms.

According to well-known Music Therapist and Facilitator Christine Stevens:

A drum circle works because of the principle of “entrainment” – when a strong rhythm exists, the other rhythms around it fall in sync. Everyone can feel the pull of a strong beat, and can easily play along, provided they don’t try too hard, essentially interfering in what is natural. The result is an experience in collaborative creativity that is accessible, inclusive and sounds really great! (1)

The “strong” rhythm she speaks of has a foundation or “heart-beat” component that is normally heard and felt as stronger and lower frequency beats on big drums such as Djun Djuns which are easily played with heavy wooden sticks like the sound of the base drum of contemporary drum sets. The base drumming of band drummers is similar.

From a music therapy perspective, “Rhythmic Entrainment”, is a scientific and music theory principle that entrains the body rhythms to an external sound rhythm pattern:

We are surrounded by rhythm, from the movement of the earth through space, to the clicking of the clock there is rhythm. As humans, we are rhythmic beings and this is the area that I want to focus on in this post. I use rhythmic entrainment techniques as an important part of the multi-sensory approach that I discussed in the last blog series…

Rhythmic Entrainment in music therapy is a specialized practice used to assist in helping people become more “in tune” to their own rhythm and the rhythms of the world around them.

Entrainment is a physics term that is used to explain that two objects moving together use less energy than two objects moving in opposite directions, so even when they are moving differently, if they are placed next to each other will, over time, begin to move together in synchronicity.

This is often seen in a drum circle, when one person starts the rhythm and the others are able to match the pattern and either duplicate it or augment it. Music therapists often work with individuals that are “out of sync” with the rest of the world, this may be due to a genetic condition such as developmental delays, cerebral palsy and autism, or traumatic brain injury, stroke, Alzheimer’s and Parkinson’s disease. In these circumstances music therapists take this physics phenomenon and use it as an intervention to help people become more aware of their personal rhythms and those of the world around them.

The lub dub of a heart beat is the primary rhythm in our bodies and it controls the circulatory system which runs throughout the body and oxygenates the blood. The oxygenated blood travels to the brain which controls the central nervous system and tells the body how and when to move. When we are excited or nervous our respiration and circulation rate increase and when we are quiet or sleeping they slow down. This is an automatic response of our bodies. 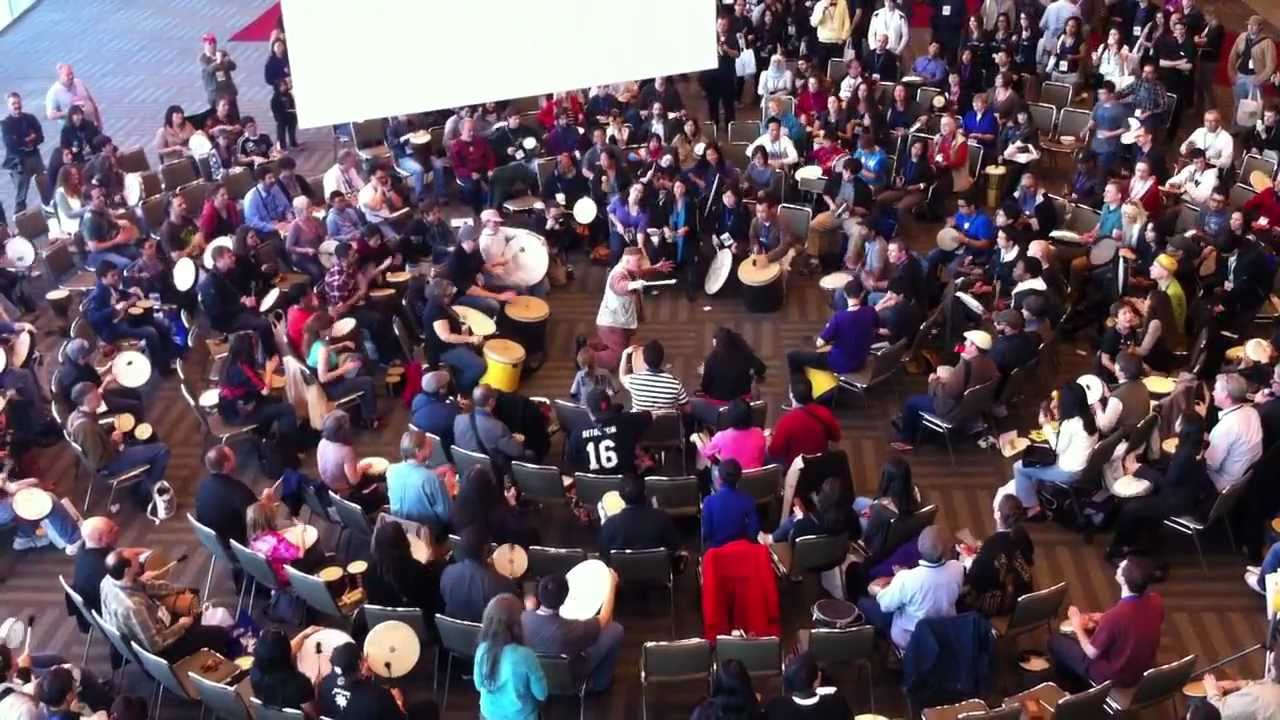 Arthur Hull, the leading facilitator of drum circles, presents empowering insight on the need to allow drum circles to “entrain” themselves.

When you play with a group that wants to go to that place and create the magic of being in the same place at the same time, together, you create that natural phenomenon called “entrainment.” Your group is “entrained” when you are in rhythmical alignment with each other.
When we are there, thoughts stop. When thoughts stop, time stops, and healing starts. We connect beyond our intellects, in a primal kinesthetic dance that is expressed using sound, and by doing so we facilitate the bonding of our spirit connections in the circle. (3)

Rhythmic Entrainment Intervention (REI) is a MusicMedicine therapy program utilizing recorded hand drumming rhythms to stimulate the central nervous system and improve brain function.REI is designed to facilitate both short-term and long-term improvement in a variety of symptoms common to neurobiological disorders…

Shamanic drumming is estimated to be between 20,000 and 30,000 years old and is considered one of the oldest organized systems for healing. Practiced in nearly all parts of the world, this technique is “…strikingly similar the world over, even for peoples whose cultures are quite different in other respects, and who have been separated by oceans and continents for tens of thousands of years.”

Shamanic drumming uses a single, repetitive rhythm played between three and four beats per second which can last from less than ten minutes to well over an hour. The rhythm played at this speed will induce a trance state in the listener and, when accompanied by specific visualizations, has been observed to facilitate healing of a variety of illnesses, both physical and psychological.(4)

From the scientific perspective, entrainment is described in physical terms.

Drumming rhythms can influence the human body because of a phenomenon of nature called entrainment. Entrainment is defined as a synchronization of two or more rhythmic cycles and was first discovered by Dutch scientist Christian Huygens in 1665. While working on the design of the pendulum clock, Huygens found that when he placed two of them on a wall near each other and started them at different times, they would eventually end up ticking in unison. Entrainment has been found to be a universal force in nature and will act on any two or more vibrating bodies as long as they have similar rhythmic cycles.

The ability of an auditory stimulus, such as the shamanic drumming rhythm, to entrain internal brain wave frequencies is known as auditory driving. Auditory driving research has found that there is a direct relationship between the speed of the rhythm played and the brain wave state created. It ís not necessary for the rhythm be repetitive and unvarying in order to have this effect. (4)

Jim Greiner, who is a corporate drum facilitator, uses entrainment at corporate events:

Musicians call it the Groove. This is when we’re playing deeply entrained with each other, and with anyone who can hear and feel our music.

We enter this state, no matter what the activity is, through repeating physical actions with positive intentions and a mindful and disciplined focus on the underlying fundamental skills of our actions. This is the place where our conscious minds take a well-deserved break from judging and editing our actions and thoughts, and our subconscious minds and our bodies connect on an intuitive level.

Of course, “repetitive actions” is just another term for “rhythms”!

It does take time to enter into this state; we have to continue repeating our actions even, and especially, when our conscious minds get “bored” and want to try something new. As the amazing American Opera singer Beverly Sills stated, “There is no shortcut to any place worth going.”!

As we build and reinforce these fundamental actions into our muscle-and nerve-memory, we are able to let go of conscious effort and enter into this Flow state. This is a state of graceful power! (5)

This entry was posted in Uncategorized. Bookmark the permalink.